Welcome back everyone! Now that things have started to settle back down it’s time to begin looking into the spicy new commanders that C20 gave us and how we can break them in half in cEDH. I got in a discord call with a few friends to talk about the new commanders and which ones had potential to make an impact in commander format and we decided to start brewing with the Gavin-est card wizards has ever printed: Gavi, Nest Warden. 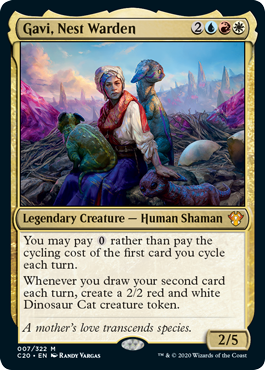 Brewing for cEDH is very different than for casual formats because the power level is so high that you have a lot of cards that are a given in nearly all decks. If you look at the cEDH staples monthly post on reddit made by Playing with Power MTG you’ll notice that there are a certain number of cards per color that are simply auto includes in every deck that can run them. So brewing cEDH is absolutely something that can be done, but with the knowledge that there is a core of cards that should always be included provided you own them. We started out by adding all the rocks we know we’d need, with the usual suspects being the legal moxen, Mana Crypt and Mana Vault, Sol Ring, and the new staple rock Arcane Signet. 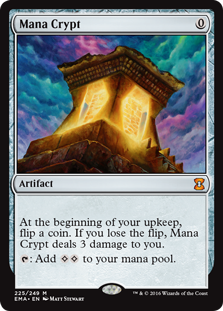 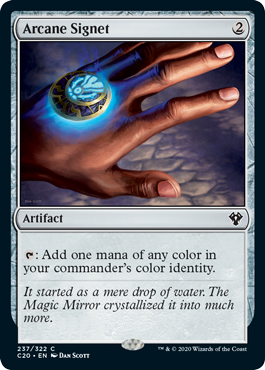 Then because we are in blue, the suite of countermagic including the newly spoiled Fierce Guardianship, which I expect to be put in every single blue commander deck for the rest of time provided you own the card, our forces, pact and the like. Next, we look at ways to get our wincons efficiently with tutors, we may not be black so we don’t have access to the best tutors but we still have Mystical Tutor, Enlightened Tutor, and a few other niche options. Now that we have the staples out of the way, we have to look at win conditions and how to make them efficient. 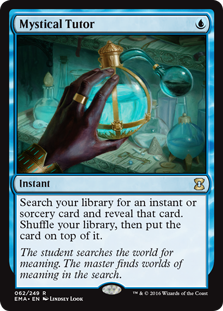 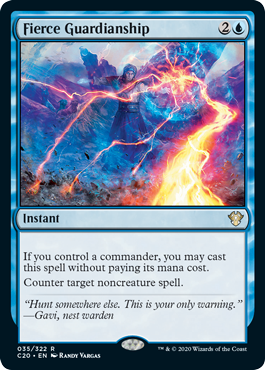 The win conditions for Jeskai are interesting to look at because we don’t have access to Demonic Consultation or Tainted Pact, so we have to look at other options for emptying our library if we want to win through the newest boogeyman of cEDH, Thassa’s Oracle. Twinflame and Dualcaster Mage has been a favorite of mine for a long time, but our final list doesn’t have enough creatures to make it efficient, as we can’t always count on having our commander out to have the creature to start this combo. The first idea we kept in the final list is Leveler. 5 mana to flip your library isn’t as efficient as Consultation, but it will get a great reaction from the table the first time they see this bad boy get windmill slammed onto the table. 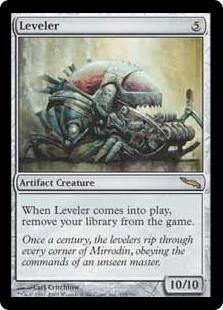 Next, as we’re cycling a lot, it’s likely there will be enough cards in the bin to begin an Underworld Breach storm line. Because Breach functions as a type of Yawgmoth’s Will it is definitely a powerful effect to consider as our main combo line. Comboing with Breach isn’t very hard, so the line we chose was with Lion’s Eye Diamond and Brain Freeze. To combo, discard your hand to Lion’s Eye Diamond, exile 3 cards to cast Brain Freeze milling yourself, and then looping this effect to either empty your library and cast Thassa’s Oracle or mill your opponents and pass the turn. 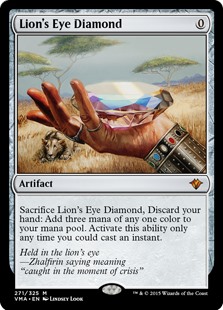 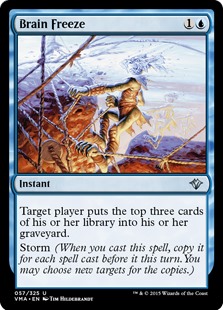 However, this can be combatted by an opposing Angel’s Grace, but who really plays white in cEDH (oh wait, we are). So now that we have two ways to get rid of the library and get to a Thassa’s Oracle-powered win, we also want to include a backup win through Isochron Scepter and Dramatic Reversal storm with Aetherflux Reservoir, or again Brain Freeze due to infinite storm count. 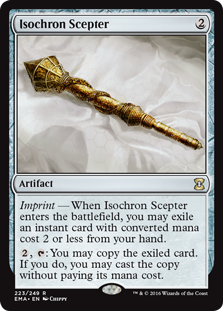 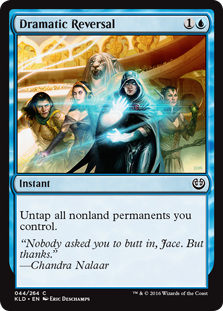 An important consideration for cEDH is efficiency in deckbuilding and making sure that you have as few cards in the deck that are dead on their own as possible. A longstanding argument within the cEDH community is whether or not Isochron Scepter is a good enough card for modern cEDH lists, and many in the community have decided it isn’t good enough alone. For me personally, it was the main wincon of my first cEDH deck so I have a bit of an emotional attachment and think that value casting it imprinting a Counterspell or Brainstorm is more than enough to justify its inclusion, especially in the first draft of a brand new deck such as this one. 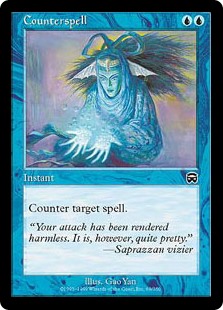 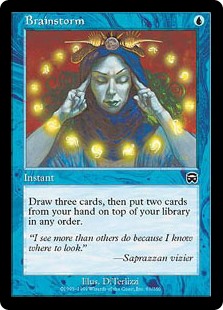 This list has done its best to have its win conditions interact and have backup against cards such as Praetor’s Grasp. The most likely line our opponents will take is to steal our Thassa’s Oracle to use themselves, so we have the backup storm line, or the ability to use Leveler to exile the library if our Brain Freeze is stolen. Also, even though it doesn’t technically win the game itself, cycling Decree of Annihilation and responding with Teferi’s Protection should do enough for you to win the game. 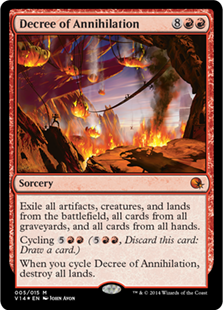 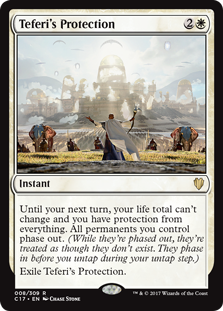 Now that we have the win conditions, we looked to fill out the deck list with the typical card advantage spells with Brainstorm, Ponder, Preordain and then searched for the most efficient cycling cards to increase the synergy with our commander, prioritizing cards like Decree of Annihilation that do something when cycled to get more value than just the Dinosaur Cat (perfect creature type, thank you for this gift WotC) that Gavi creates. Now that we’ve gone through the brewing process, let’s look at what 3 Reasons Past Writers can brew up for the brand-new cycling commander, Gavi, Nest Warden.

Wrapping it all up!

Gavi looks like an incredibly fun commander and despite having taken a hiatus from cEDH since pioneer was announced as a format, Gavi may very well be the commander that brings me back. There is so much value to be had with Gavi and the deck does all the things I want to be doing as a Magic player. I have already preordered my copy of Timeless Wisdom from my LGS, and will be putting together something similar to this list once we are allowed to go out again. I will be sticking to this suite of wincons but will probably alter the cycling spells and toy with the mana base more as this list is tested and tuned to a specific meta.

Next week will be a similar article, where we take another one of the commanders spoiled in C20 and brew another spicy new list around it. Let me know in the comments who you want to see, though Brallin and Shabraz will be held off for a later week so that we don’t have two Jeskai decks in a row. Until next time!

Ikoria has some huge creatures in it, and Jonah Gaynor is excited about this monstrous set! Check out his analysis on some of the best creatures in the set right here on Reasons Past.