[Editor’s Note: This article was written the week of March 9th, but we had to take a break from publishing due to COVID-19. Reasons Past urges all of its readers to stay inside and stay safe, and hopefully enjoy even more Magic content!]

You heard me right. Today we are joining the hordes of players jamming the boogeyman of the Commander format. But our boogeyman has been away from its native Phyrexian archetype of Infect for far too long, and has never watched the 1973-1984 classic “Superfriends.” No, our boogeyman went on a 10-month drug-fueled bender in the forests of Verduran and has come out the other end a little more magical and a lot more crazy. Our boogeyman is an enchantress.

Enchantress decks in EDH tend to be either Selesnya or Bant, and about two years ago, my deck was no different. But after a couple months playing the deck with Phelddagrif, the happy purple hippo (if you haven’t watched Friday Nights circa 2012, do yourself a favor and BINGE) at the helm, I found the deck to be too linear — I was doing the same thing every game, and I was getting bored. Adding black to the mix would allow me to fragment the strategy, giving more variety and replayability to my favorite deck. Plus I would get to play sick legendary creatures like Zur the Enchanter (calm down I’m not playing Necropotence) and the edgiest champion of Meletis, Daxos the Returned. And since I didn’t want to delve into the partner commanders or break the rules of EDH to play a questionable 1/1 in the form of Witch-Maw Nephilim, Atraxa, Praetor’s Voice was the clear choice. 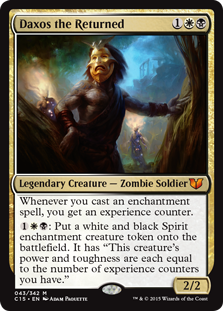 The Praetor’s Voice and I had a great time, with months of play solidifying the deck as one of, if not my singular favorite pile of cards. Due to my unfortunate tendency to spend too much money on cardboard, though, the deck drifted to the bottom of my bag, seeing less and less play as time and sets passed. And there it remained — until the release of Theros Beyond Death. With the release of a set centered around enchantments and, at least for me, nostalgia, dusting off my old pet deck seemed like a no brainer.

Unlike most of my EDH decks, my choice of everyone’s favorite horrific angelic vocalist as my Commander was informed mostly by color identity. This choice has implications for both deck construction and piloting. The 99 is an enchantress deck first and an Atraxa deck, like, third or fourth. This means in turn that you can play games — and I have — where you only get around to casting the honorary Phyrexian once or not at all and still win. It doesn’t mean, though, that we should be ignoring Atraxa’s very potent rules text. In constructing our pile, we should pay special attention to enchantments that interact with counters. More on that later.

The backbone of every enchantress deck, EDH or otherwise, are enchantresses. Duh. Way back in Alpha, Wizards printed a green 0/1 with way too many words on it. After the rules department figured out grammar, it read “Whenever you cast an enchantment spell, draw a card” and they have been functionally reprinting it ever since.  These innocuous creatures are what make enchantment-centric strategies possible — they turn cards from arguably the worst card type in Magic into flexible tools that always replace themselves. So naturally, we want all of them, especially ones that are either hard to interact with, like Argothian Enchantress or Enchantress’s Presence, or trigger upon entering the battlefield, like Eidolon of Blossoms. They power up all of our enchantments, particularly the ones we can cast multiple times throughout the course of the game, like Flickering Ward and Mana Bloom. 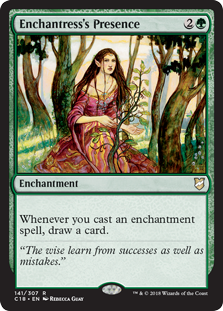 The other slightly more expensive backbone of enchantress decks is a single card: the perhaps broken, definitely gross legendary land Serra’s Sanctum. With a critical mass of enchantments, the sanctum produces a disgusting amount of mana, allowing us to play a revolting amount of enchantments, which in turn causes us — with the help of Verduran Enchantress and her copycat friends — to draw a deplorable amount of cards. I hope you get the point, because I am running out of synonyms for yucky. To best facilitate our biohazard, we have a suite of tutors, like Weathered Wayfarer and Tolaria West, to go out looking for it and a plethora of untap effects, like Garruk Wildspeaker and Deserted Temple, to just win more™. These untap effects also pair well with effects like Utopia Sprawl or Fertile Ground that increase the amount of mana that a single land produces.

Since we can’t be bothered with playing too many creatures with power greater than two, we have to find some way of dealing with the combat step. But since their unifying factor is years of living alone in the woods, enchantresses, boogeymen or otherwise, are a nonconfrontational folk. To force the TCG equivalent of emotional repression on the rest of the table, we play a suite of effects like Propaganda, Collective Restraint, and — most therapy inciting of them all — Solitary Confinement. 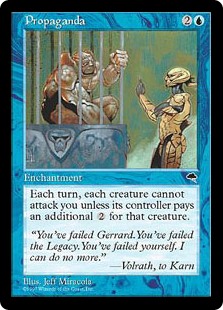 The unfortunate truth of playing cards that do their best work on the battlefield is that they can almost always be taken off of it — such are the rules of Magic. Thankfully, we have some effects we can use to… bend those rules. Lightning Greaves and Sterling Grove both protect our permanents from targeted interaction. When protection fails, we have recursion effects like Hanna, Ship’s Navigator, Sun Titan, Starfield of Nyx, and Replenish. And if you have nothing better to do, Sterling Grove + Sun Titan will give you something better to do — might I suggest Seal of Doom or Aura of Silence to pick off your opponents best permanents? Every turn?

Because there clearly isn’t enough going on in this pile of cardboard, we also have a light enter the battlefield subtheme to play around with. Grim Guardian and Eidolon of Blossoms both trigger upon enchantments entering the battlefield, which can happen either naturally or via a kingly haunting from Brago, King Eternal or interplanar visit from Venser, the Sojourner. Particularly… enchanting… destinations for either of our kingly tourists are effects like Detention Sphere to either nuke tokens or retarget removal and the powerful Treachery to untap our angelic quagmire, Serra’s Sanctum. 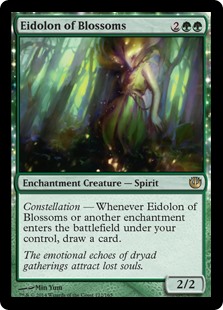 This deck is very good at durdling, which is really all that I could ever want from a game of EDH. But if after all that your opponents haven’t scooped and you really want to close the game out, Atraxa has a couple of ways to make that happen. Sigil of the Empty Throne, Daxos the Returned, and Starfield of Nyx all go wide and tall with our enchantments. There is also a combo kill in the form of Mirari’s Wake + Cloudstone Curio + Treachery for infinite mana, then Grim Guardian for infinite damage.

So that’s the deck! Except, something’s missing — namely, the reason I wrote this article. The return of Theros! Here are the cuts and additions I made for the set, and why. 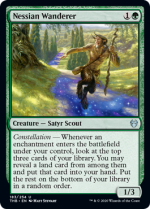 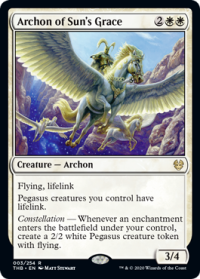 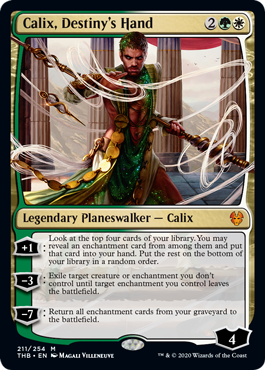 Thanks for listening to me rant about one of my favorite decks. I hope you enjoy Atraxa as much as I do!

Want to play a ridiculous combo that is incidentally also angel-based, but in Standard? Jonah Gaynor has you covered with a deck that features Demons, Dragons, and Angels alike.