With representation from many of the “top” decks in the field, Jund’s versatile toolbelt of answers and consistent threats and disruption was able to take advantage of the moving parts of many of the decks in the competition and claim first prize. And if you want to learn more about Jund’s positioning in Modern at the moment, feel free to read my article from earlier this month here.

Other times, however, a brewer’s paradise is just that. And finishing third in the Modern Classic at SCG Indianapolis was Grixis Urza Breach, piloted by Ryan Bennett.

It’s important to note first that this archetype was not originally constructed by Ryan Bennett, but by William Thompson. The biggest difference between the lists that Thompson has developed and the list that Ryan Top 8’ed the Modern Classic with is that Thompson has been a proponent of playing a fairly different creature package.

Urchin Colley wrote a great breakdown of Thompson’s list that you can check out here.

If you read Colley’s piece, you will realize that one of the most surprising aspects of Ryan’s list is the lack of Memnite and Scrap Trawler. Both cards in Thompsons list allow Underworld Breach to be an exceptionally powerful card that can start mill loops with Grinding Station and Sword of the Meek either on the field or in the graveyard.

Even Goblin Engineer enables powerful combo turns in the deck,  letting you put any artifact from your deck into your graveyard (effectively your hand with Underworld Breach) which can increase the speed and consistency of the deck.

In their stead, however, Ryan chose to play two fewer creatures, and to play four copies of Sly Requisitioner over all of the aforementioned cards. 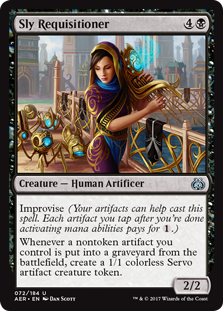 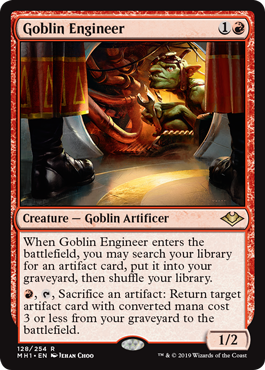 My read here is that Ryan chose this for a couple of reasons. First, Requisitioner gives the deck another angle of attack. Whereas Thompson’s list is very focused on winning through a combo that requires moving pieces, Ryan’s list rewards itself for simply looping artifacts in and out of the graveyard to gain board advantage.

This is a very powerful main deck strategy to have alongside a combo finish because both victory scenarios can occur early in a game and require essentially the same board set up: some combination of Grinding Station, Underworld Breach,  and Sword of the Meek.

Second, often times Requisitioner will be cheaper than a Sai, Master Thopterist which lets this strategy be enacted earlier in a game. Decks that are centered on cheap artifacts and incremental value gains such as this one are all about the margins — winning one turn earlier, having one extra mana — so having a versatile and often cheap tool like Requisitioner in a list is a big boon in that area.

Other than the addition of Requisitioner, Ryan’s artifact suite and lands are pretty close to what Thompson has developed. The only other decision of note that Ryan made was to include three copies of Engineered Explosives in his main deck.

In a very permanent-heavy Top 8, and even Top 16, this seems like a smart metagame decision. Engineered Explosives has always been a flexible tool to get rid of pesky disruptive permanents or to clear a board. In this deck, I imagine the card takes a lot of skill to cast, as the deck itself has a number of low-cost permanents. The nice thing is with Underworld Breach, losing your permanents is actually pretty great. Sometimes even necessary! 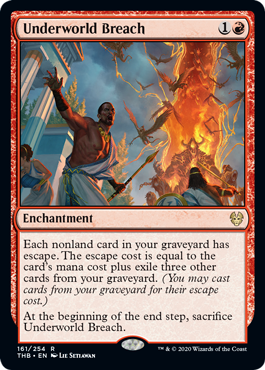 So they= deck is cool, but as always, we have to talk about its positioning in the current metagame. Will this deck be a flash in the pan, or a longer-term staple in the Modern format? And mind you, this is all predicated on the fact that Underworld Breach is still legal. Based on the (excuse my french) degenerate strategies I have seen being enabled by this powerful two-mana enchantment, on top of Wizards’ stance on bans in recent months, the card may not be long for this format.

In pre-board games, this deck feels pretty powerful in the Modern meta landscape. Both the combo game plan and the fair game plan on using Urza and Requisitioner to beat your opponent to death are both potent strategies. Especially with a lot of relatively non-interactive Titan decks in the format, being able to win quickly or build a construct that can profitably block a Primeval Titan is really powerful.

This deck also seems like it would beat up on the low-to-the-ground red decks as well as control strategies that may have a tough time using their resources to stop an aggressive creature opening and the potential of a combo kill basically throughout the match.

And like many decks, the element of surprise and confusion is always a boost to a deck’s chances in any metagame. Most people will have no clue how or when to interact with a deck like this. Incorrect picks off of Thoughtseize or poorly-timed counterspells can definitely hand this decks wins too.

Unlike pre-board games, the post-board situation is a bit more tenuous for this deck. Like many combo decks in Modern, this deck is definitely susceptible to sideboard hate. Surgical Extraction, Leyline of the Void, Tormod’s Crypt, Damping Sphere and Rest in Peace are cards being played in the sideboards of Modern’s premier decks, and they all pose problems for this list. 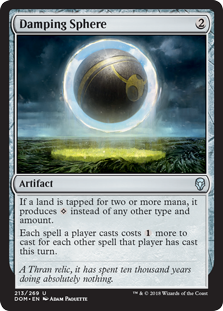 As such it makes sense that most of Ryan’s board is dedicated to countering the hate, with tools like Aether Gust, Nature’s Claim, and Echoing Truth being able to deal with many of the effects other decks can board in.

Ryan Bennett’s Grixis Urza Breach build is definitely viable in the current Modern format, and in fact I think it has the potential to perform like the Lotus Breach deck did at Players’ Tour Phoenix, where it put two copies of the deck into the Top 8. I do think however, that like most Urza decks, extensive testing and experience will be a prerequisite to performing well.

You will have to have a clear understanding of what to play around in Modern, which is tough in such a vast format, and you will also need to know all of the lines that can get you in a winning position. This is especially tough because the number of lines and permutations of sequencing that one can take with this deck every turn is ridiculously high, meaning that only getting in a lot of games with the deck will help you pilot it optimally.

With all that being said, keep and eye out for Grixis Urza Breach on the SCG circuit, and keep an eye out for cool new decks I’ll be writing about in the coming weeks!

Dreamhack Anaheim set a new course for this Standard format, and Jonah Gaynor has the latest scoop on how Standard will develop in the coming weeks.

One thought on “Water is Wet and Urza is Still Good in Modern!”