Hello hello! This past weekend, Dreamhack Anaheim took place, an event that boasted a $100,000 prize pool, greatly outweighing the general knowledge and excitement about the event. Nonetheless, this was a very big and important (brace yourselves, I’m gonna say esports…) esports tournament that gives us good insight into the top tier metagame in Standard.

Going into this weekend, we were expecting something fairly similar to the Worlds metagame, with Azorius Control, Temur Reclamation, Mono-Red Aggro, and Jeskai Fires having a somewhat equal share, and other more fringe decks such as Bant Midrange, Jund Sacrifice, and Esper Control making up most of the remainder of the field.

What we found wasn’t terribly far off from this, but as the tournament advanced into its later stages, a clear pattern emerged, and a new most popular deck did as well.

Azorius Control was without a doubt the most successful deck this weekend. Dreamhack’s tournament structure saw it cut to a Top 16 bracket, unlike the usual Top 8. And eight, yes eight (8) of those top 16 deck were Azorius Control! While it did win Worlds in the hands of one Paulo Vitor Damo da Rosa (nicknamed GOAT in some circles), Azorius Control was thought of mostly as a tier 1 deck that would rarely be the best deck in the format, due to it needing to account for extremely diverse strategies, such as Mono-Red Aggro and Temur Reclamation. This tournament certainly proved that wrong, as the top 16 featured some of the best players in the world playing Azorius Control, including the top two players in the Elo Rating system, one of the best MtGO players of all time, and a Hall of Famer. 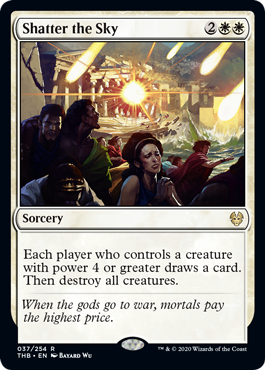 Another extremely notable feature of the Top 16 was Temur Reclamation and Mono-Red Aggro’s presence, or rather the lack thereof with each deck putting only a single copy into the Top 16.

I’m not one to overreact (wait yes, I totally am) but I think Temur Reclamation may have run its course in this Standard format. It’s difficult for a deck that relies so heavily on a 4 mana enchantment to play the game it wants to play when opponents are jamming Teferi, Time Ravelers, Knight of Autumns, and Narset, Parter of Veils all over the place. Looking at the other “top” decks going into this weekend, the only matchup that you could convincingly argue is in Temur Rec’s favor is its matchup against Mono-Red Aggro! It’s at best a 50/50 against Azorius Control, and it’s a fairly big underdog to Jeskai Fires.

Therefore, I do declare that Temur Reclamation is dead.

Mono-Red Aggro is a deck that I could talk about for hours on end, [Editor’s Note: and he has] as I think it’s one of the most interesting mono-colored aggro decks that we’ve seen in some time, but its poor showing this weekend cannot be ignored. For a few days on Arena, it felt like Mono-Red Aggro was the best and most played deck in the format. Its sheer power level and the intricate play patterns it presented made it one of the most consistently excellent and yet high play skill decks that I’ve ever seen in Standard. Unfortunately, each other deck has the ability to beat Mono-Red Aggro if they simply adjust their decks slightly and change marginal card choices to attack the aggressive deck. Unfortunately for the red fanatics out there, that seems to be exactly what happened this weekend. 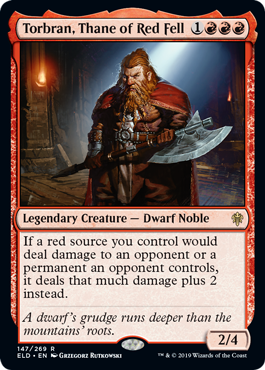 Therefore, I do declare that Mono-Red Aggro… just needs a couple weeks to chill out before it’s good again.

Of course, Azorius Control’s dominance at Dreamhack Anaheim should be a major talking point this week, but a new challenger has emerged…

Aaron Gertler (littlebeep on Arena) is the #1 ranked Constructed player on Arena at the moment, and boy oh boy is he a good player. Temur Clover was a deck that, to the best of my memory, was created by MPL member Jean-Emanuel Depraz. The idea behind it is that both Edgewall Innkeeper and Lucky Clover are each able to out-card advantage nearly every opponent’s best draws. Lucky Clover, specifically, is incredibly powerful in this deck against both aggressive decks (where Bonecrusher Giant and Brazen Borrower are good) and against much slower decks (where Fae of Wishes single handedly wins games). 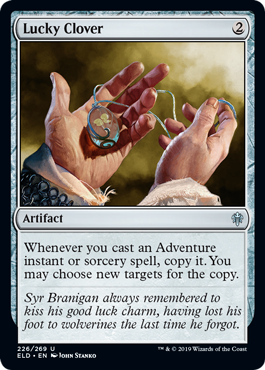 In a strange way, this deck actually functions in the metagame very similarly to how a traditional Mono-Red Aggro deck does. When players aren’t prepared for what this deck does, in this case a turn 1 Edgewall Innkeeper or a turn 2 Lucky Clover, this deck will dominate. UW Control has a few glaring weaknesses, and both are taken advantage of by this deck. Firstly, it struggles to permanently deal with cards that come down early and can’t be handled by either Shatter the Sky or Elspeth Conquers Death. Secondly, it struggles when it gets out-card advantaged, and that is all that this Temur Clover deck is built to do.

So, is it time to enter the age of Temur Clover dominance over Standard?

I think not, largely because Temur Clover is a fairly variance-dependent deck in several different matchups, and is extremely hard to play optimally. That’s why you have a player like Gertler who is succeeding with it due to his flawless play. My rule of thumb is that I’m not afraid of Temur Clover in this metagame, but definitely afraid any time my opponent plays a turn 1 Temple of Abandon followed up by a turn 2 Island and Lucky Clover.

If you had to force me to make a metagame breakdown, here’s what I think that would look like:

Like Stoneforge Mystic AND Felidar Guardian? Kind of a weird choice of cards, but don’t worry, because Andrew Eaddy has you covered right here on Reasons Past.

One thought on “Standard is Shifting: Analyzing Dreamhack Anaheim Results”