The biggest Magic tournament of the year, the World Championship, took place this past weekend. And while Magic is now aggressively pursuing the (brace yourselves, I’m about to say esports)… esports tag thanks to Arena’s success, this Worlds tournament felt a bit like the good old days, where we got a chance to see both Limited and Standard in action, and incredibly high stakes matches between some of the best players the game has ever seen.

There were many takeaways from this weekend for everyone watching, but I’m going to focus on Standard, and particularly what I consider to be the best deck in the format (and it didn’t even make the finals!).

Spells (7)
4 Light Up the Stage
3 Embercleave

We knew that Mono-Red Aggro was going to be a player coming into Worlds. The printing of Anax, Hardened in the Forge justified the inclusion of Embercleave as well as giving the deck a considerable amount of play against decks that are looking to cast wrath effects in their matchup against Red.

The main innovation that Seth and Andrea made was the addition of Robber of the Rich. As a 2/2 haste for 2, Robber doesn’t really do much of anything unless you can rely on both being the aggressor for the majority of the opening turns and facing down wrath effects from your opponent’s deck. This happens to be the exact type of format we find ourselves in now. The other major decks in the format are Temur Reclamation (Storm’s Wrath), U/W Control (Shatter the Sky), and Jeskai Fires (Deafening Clarion). 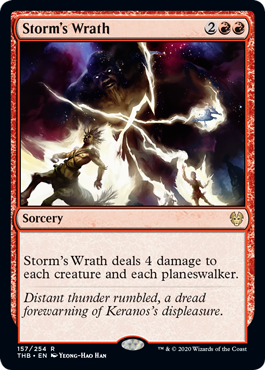 Each of these matchups are centrally defined by the pressure put on pre-wrath, and the ability to present burst damage or properly rebuild the board following a wrath effect. Robber of the Rich allows you to present a decent clock  and draw you cards out of your opponent’s deck pre-wrath, while providing a sometimes necessary bit of burst damage post-wrath. The makeup of this metagame has also greatly diminished the impact of Shock. Where previously you could fairly regularly trade 1-for-1 with your 1 mana Shock, now you struggle to find uses for it in non-mirror matches, which is why Seth and Andrea have cut it. 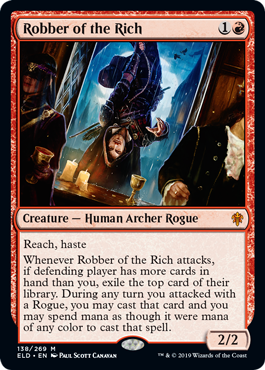 That being said, I should note that due to the wrath effects in this format being 3 and 4 mana, rather than the 4 or 5 mana we have recently become accustomed to, your opponents are likely to be at a much higher life total than they would have been in previous Standard formats. Seeing your opponent board wipe you between 12 and 16 life is a very common occurrence. This shift in the so-called “wrath turn” has also changed Mono-Red Aggro deck-building to favor cards that have a higher damage output per turn. This is why the term “Mono-Red Aggro” might be a slight bit of a misnomer. Don’t get me wrong, this is still a deck with 8 1-drops and great closing speed, but it’s much less of a burn deck than its name generally implies.

Now that we have much more of a solidified metagame, we can, just as Seth and Andrea did, tune this Mono-Red deck to better match up against the decks we’re expecting to regularly face.

Firstly, I think Runaway Steam-Kin’s days in this deck are numbered. It’s a very juicy target for opposition Teferi, Time Ravelers, which is a card that generally we match up favorably against, and ranges from mediocre to awful in the mirror, depending on play-draw. The card’s ceiling is still extremely high, as its ability to let you dump your hand on the board and make a threatening attacker with Embercleave hasn’t changed, but I think shaving a couple copies of the elemental is the way to go in the future.

Rimrock Knight is also a card that could be shaved, in my opinion. The Boulder Rush side of the card is certainly nothing to shake a stick at, but with Brazen Borrowers aplenty and blocking being very important in the mirror, the card gets significantly worse. Because of this, Rimrock Knight mostly functions as a 3/1 for 2 that can’t block with marginal upside, which is actually fairly comparable to Unchained Berserker. Berserker has a much larger potential upside, however. 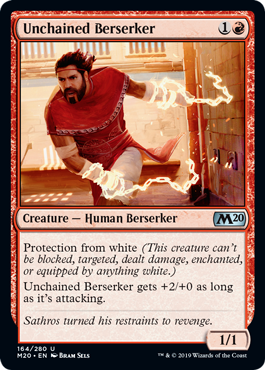 Moving forward, I am also interested in cutting some number of Light Up the Stage. Light has a bit of a reputation as an uncuttable card, but this format lends itself to being a poor one for the sorcery. In the mirror, Light Up the Stage is strong, but attacking through your opponent’s defenses can be a bit of a questionable proposition. In non-mirror matchups, as I mentioned earlier, you focus much more on presenting as much damage on board every turn, rather than juicing the most value out of each card you play, which is where Light Up the Stage shines. Spending a mana, or even a full turn, on casting Divination is a very easy way to lose the game when your opponent has the ability to cast Cavalier of Flame, Dream Trawler, or Expansion//Explosion.

Here is where I am with Mono-Red Aggro in Standard at the moment:

I fully expect Mono-Red Aggro to be a force in the coming months of this Standard format, and I highly encourage you give it a try if you haven’t had the pleasure of doing so yet. In addition to those Riccardo Monico wrote about last week, here are some final tips about piloting the deck that I’ll leave you with:

Skip out on all the Valentine’s Day festivities, partner? Take Luca Blankenship’s deck for a spin at your weekly Commander night and show people why they should respect the power of friendship.