To summarize, rather than having a rigid schedule of banned and restricted announcements like we have been having for at least as long as I’ve been in the game (going on 8 years now), banned and restricted announcements will come whenever those responsible for these decisions at Wizards of the Coast see fit. While this is somewhat unlikely to result in more or fewer bans in any format, it is a rather significant change that will change how we view bans, formats, and the paper game.

So what changes now?

Firstly, the impact of each banned and restricted announcement will now be non-zero. For as long as they have existed, the majority of scheduled banned and restricted have made no changes to any format. If you are newer to the game, that might sound a bit strange, but I assure you that the last few years of Standard is not the norm. Before this current era of Standard, from roughly Kaladesh on, we got used to seeing no change announcements, or even not checking them when they came out! With this change, unless there really is some extraordinary circumstance or I am misinterpreting what this change means, every time that a banned and restricted announcement comes out, there will be at least one change to one format. Personally, I’m a big fan of this! The only time that the community was really upset at these announcements is when they felt that a change was needed and none came. [Editor’s Note: This sounds like a familiar feeling…]

As with most changes to Magic nowadays, this change should also be viewed in the context of the Arena-focused world the game now lives in. For Standard Arena players, this is fantastic news! For most other… (brace yourselves, I’m about to say “esports”)… esports, whenever a critical issue arises that could lead to the player base losing interest in the game or being less satisfied with the game, the game developers can quickly make a patch. This isn’t a realistic possibility in Magic, of course, because the non-digital game cannot reasonably have these sorts of patches. It would be the death of Magic if newer players had to go out of their way to check every single card they opened to make sure it wasn’t patched. That being said, this announcement should be seen as a step in that direction. If there is ever a card or strategy that is clearly becoming an issue, it can be stamped out without having to wait for a system designed for the paper game to catch up. If it wasn’t clear enough before, Magic is no longer primarily a non-digital game, its priorities now lie both in digital and non-digital.

So what does this mean for the paper game?

One interpretation that I don’t think is wrong is that this move is a net negative for paper Magic. A constant talking point of Wizards of the Coast vis-a-vis bans is that they wanted to avoid them at all costs, as they erode consumer confidence in their product. To put it in less professional terms, it really sucks when you buy cards or open packs and the cards that you spent money on get banned! This isn’t as much of a problem on Arena, however, as Wizards can immediately “make things right” with their players by adding wildcards to their accounts.

This change, for the paper game at least, is likely to have a negative impact on consumer confidence. While it was certainly frustrating for paper players to have to deal with bannings of cards they had invested money into, there was some consolation in the regularity of bannings. The community at large was generally in agreement regarding possible bannings whenever a banned and restricted announcement was in the near future, allowing players to anticipate if and when their cards were going to be banned. This new change takes away that anticipation, and players will likely live in fear of their cards being banned whenever they play the best strategy in any given format.

On the flip side, this could be a real positive for the health of paper Standard! I have written a bit about this before, mostly in my article discussing the London Mulligan, but to summarize: the existence of Arena has vastly increased the number of Standard games being played, which has, in my mind and many others’, led to formats, especially Standard, becoming stale much faster than in the pre-Arena days (which we’re now calling B.A.).

Standard attendance is down, even after the removal of a certain elk-lover from the format and most agree that the format is healthy and fun. Paper Standard is now simply a version of the Arena format where you can’t fit in as many games. That being said, large Standard tournaments are perhaps the most fun Magic to watch and play in when we are in the midst of a “new” format. Obviously, rotation exists in large part for this purpose, but bans can have this sort of effect as well! If bans are going to be unannounced (or rather, not guaranteed to be announced weeks or months in advance), we are going to see this exciting scramble more frequently, where innovation is rewarded and viewers from all over the world tune in to find their next Standard obsession.

I’ll leave you today with my hopes for the banned and restricted lists for each of Magic’s major constructed formats.

No changes! Standard is a great place at the moment, and there appear to be between 5 and 8 decks that are all equally viable and fun to play. Go Standard!

Oko, Thief of Crowns is banned.

The Faithless Looting ban in Modern was something that I wasn’t sure about when it happened, but wow has it been great for the health of the format! The graveyard decks were a step above the other decks in the format, and now Modern is very, very close to the format that Wizards wants it to be; a format where nearly every style of deck is viable, and no one deck dominates.In my mind, there are two cards that are standing in the way of this happening. Oko, Thief of Crowns is rearing its ugly head in nearly every format it is legal in, and I think a banning would do the health of the format a lot of good.

Similarly, Urza, Lord High Artificer should be banned, but for slightly different reasons. Urza has the problem of being the consensus best thing to do with artifacts in the format, while being a strategy in and of itself. What this causes is a swell of artifact decks that all do the same thing. Additionally, very few strategies are inherently good against these decks, which has created a situation that should be watched closely by Wizards of the Coast. 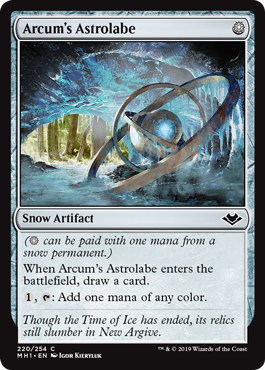 This one I don’t think will happen, but I do think banning Arcum’s Astrolabe would push the format in a slightly better direction. Astrolabe has greatly increased the number of basic lands in the format, and the Legacy saying of “a format where Wasteland is good is healthy” still rings true. Astrolabe isn’t egregious in the same way many other banned cards are, but I do think Legacy would be improved if the artifact was removed.

[Editor’s Note: This article was submitted at an unfortunate time, sorry Jonah!]

Interested in the Cat-Oven deck that won the Mythic Championship? Check out Jonah’s article all about the best deck in Standard right here at reasonspast.com.