Anje Falkenrath certainly wasn’t the commander from C19 that most people were expecting to do a madness in the cEDH meta, with that honor going to Elsha of the Infinite (It literally has infinite in the name, its gotta do something right?). However, as a Rakdos and Vampire fanboy myself, I knew I had to jank out some pods with the newest member of the Rakdos commander family. So let’s take a look at how we want to construct Anje at the highest power level in commander. 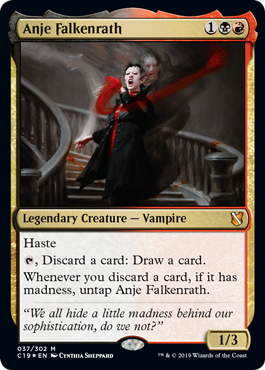 The start for any cEDH list after your commander choice should be your win condition, aso we can discuss that first. Anje is at an inherent disadvantage relative to most of the meta, as any non-blue commander really needs to be something special to make a splash. Godo, Bandit Warlord just needs to count to 11, The Gitrog Monster can come down T2 pretty frequently and is hard to interact with, and Yisan, the Wanderer Bard breaks parity on stax pieces well enough to slow everyone else down until they pull off the win. Anje however, can be built to go as fast as possible and try to sneak out a win before people are done casting their dorks and rocks. The wincons I run in my Anje list are Worldgorger Dragon (henceforth written as WGD), Dualcaster + Twinflame, and then a Doomsday [Editor’s Note: how is this card still legal?] pile. 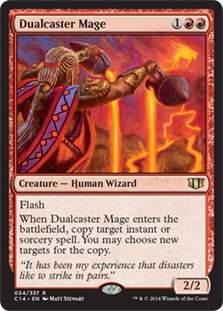 For those unfamiliar; WGD combo works with a reanimation enchantment such as Animate Dead. When Animate Dead reanimates WGD, all of your permanents are exiled, including the enchantment attached to WGD. Float your mana and then when Animate Dead leaves the battlefield, WGD dies. This triggers the return of your permanents including Animate Dead to reanimate WGD once again, leading to infinite mana of colors that your lands produce. With Anje on board, you can rummage repeatedly until you hit a win condition such as Avacyn’s Judgment, Cut / /Ribbons, or Bloodhall Priest. The Doomsday pile requires Anje to be on board, and in order is Faithless Looting, WGD, Animate Dead, wincon of choice, and then Pyroblast/Red Elemental Blast. Dualcaster combo is a bit more mana intensive at RRR2 for an unprotected combo, cast Twinflame, then flash in Dualcaster Mage copying Twinflame, repeating this loop for infinite hasty mages.

Anje’s strength, and reason to run her as your commander over Xantcha is that her rummaging ability lets you turbo towards your wincons at a pace unmatched by other lists. Anje has haste and taps to discard a card, draw a card. An underwhelming ability at first glance, but if you discard a card with madness for Anje, she untaps. This leads to a really interesting deckbuilding space as a lot of the deck is dedicated to cards with madness. In the Rakdos colors, there are a total of 40 cards with madness, and depending on how you look at it, that leads to the ability to play a “60 card deck” because you rummage any and all madness cards away, getting to the gas of the deck incredibly quickly.

Madness is at its best in limited, as it allows players to play big fatties early on the curve. Because of this, so many madness cards are not even going to be looked at as a possibility in cEDH, (looking at you Senseless Rage) so how should we prioritize which madness cards to play if we drop below the 40 available? The first ones to include are all the creatures, because Mausoleum Secrets is able to get all relevant cards it can search once you hit 3 creatures in yard (reanimate enchantments or Entomb to dump WGD). Past this, you look at what madness cards you might actually cast, such as removal or hand disruption in as Dark Withering or Psychotic Episode. Personally, I run 35 Madness cards over the full 40, in favor of running more protection and tutors. 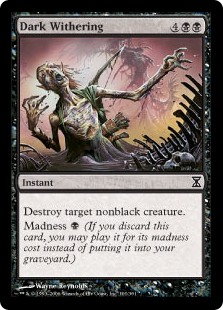 Anje can be a very fun and refreshing cEDH list that provides a fun change of pace and plays a few combos that I personally enjoy. The deck is easy enough to pick up and play well, but also has a hidden complexity that makes the deck an absolute powerhouse in the right meta. Although the list isn’t particularly budget friendly, some largescale cuts could be made to bring it to budget such as dropping Imperial Seal, Badlands, and the fetches. However, cutting the fast rocks such as Mana Crypt hurts the deck quite a lot as our goal is to go fast as possible and Crypt + Shadowblood Ridge is a T1 Anje. This deck definitely doesn’t enjoy going late in the turn order as your goal is to go T2 Anje while everyone is still tapped out from going T1 Dork/Rock and then turbo rummaging until the blue player overextends/multiple people are tapped out and then gorging worlds to victory.

On other builds: there is a list that the Laboratory Maniacs brewed up that includes end step hand sculpts and runs regular reanimation spells with Vilis and Razaketh that wins through Cloudstone Curio loops with Dockside Extortionist to generate infinite mana alongside WGD combo, but personally I find that to be too many moving pieces and prefer to stick to a simpler strategy of turning Anje sideways on the opponent to my right’s end step and dumping a WGD to be reanimated on my turn.

Important things to consider while playing the list: Madness cards interact very favorably with Necropotence, as the oracle text reads “Whenever you discard a card, exile that card from your graveyard.” and Madness reads “If you discard this card, discard it into exile. When you do, cast it for its madness cost or put it into your graveyard.” This means that the madness card gets discarded to exile and then if you choose not to cast it, then it moves to your graveyard, getting around necro’s exile. Also, Necromancy interacts well with Necropotence. Again looking at the oracle text, “Exile it from your graveyard” this leaves a point where you can discard a WGD into Necropotence and reanimate it at instant speed with Necromancy before Necropotence has the chance to exile it.

Bloodhall Priest is a hard wincon to pull off, as you have to be empty handed during the WGD combo. The way this is achieved is by casting Priest for its madness cost and then rummaging via Anje until your hand is only instants and then casting all of them, then continuing the loop. Not an ideal way to win as this forgoes any protection in hand, but allows you to have a higher density of win conditions that you can eat a Praetor’s Grasp and not have to scoop. Lastly, don’t be afraid to cast the madness cards. 10 function as removal or board wipes, 1 can throw a counterspell or opposing win condition to the bottom of an opponents library, and one can misdirect a spell that would cause you to lose your entire board to a well timed removal spell on WGD. 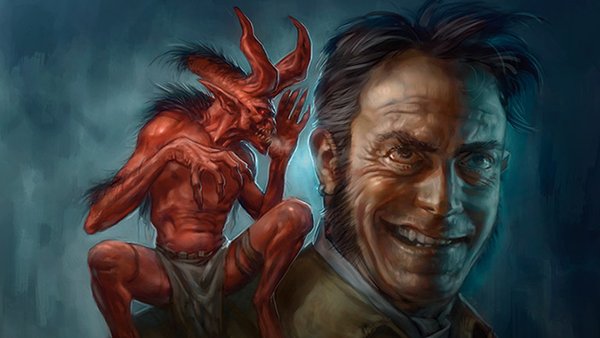 Descending into the Madness: The deck overall is a very fun change of pace in cEDH, and sure, it won’t win you every game you play, but I have piloted this list to great success personally, and will look to continue to adapt and tune it to both my own and to blind metas should a Commandfest be in my future. Until next week, where we won’t Abandon Reason and look at a tiered cEDH build.

If you’ve ever had an interest in Magic theory, head over to Jed Pienkny’s article where he delves into how counterplay has evolved and developed to become a staple of modern Magic gameplay.

One thought on “Doing a Madness in cEDH: 60 Cards With Anje Falkenrath”